FIND OUT HOW TO KEEP YOUR CAR RUNNING SMOOTH

The Importance of having a Pre-Purchase Inspection

We will carry out an independent and unbiased visual and operating inspection. We will check the general condition of any vehicle you may be looking at buying.

We will conduct a thorough inspection of the vehicle to help avoid any unforeseen surprises.
A Pre Purchase Inspection is based on the external examination of components and will identify faults which exist at the time. 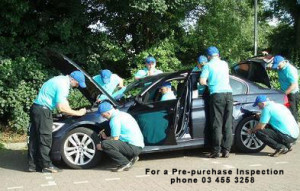 With the vehicle’s history, the key questions to ask are:

– Is there finance owing on the vehicle
– Is it stolen?
– Was the car imported in a damaged state?
– Has it had a wound back odometer?

Here is an article from a current Auto Talk Magazine to Highlight the importance of getting an independent Pre-Purchase Inspection:

‘Sight unseen’ issues increasing – MVDT
Buyers taking the risk of purchasing a car via the internet without viewing it themselves are causing a headache for the Motor Vehicle Disputes Tribunal – with an increasing number of cases ending up there when the deals ‘turn to custard’.

This comes from the just-released MVDT adjudicators’ annual report for the Auckland tribunal. In cases that ‘require special mention’- in the report by adjudicator Christopher Cornwell – are instances of ‘sight unseen’ purchases through TradeMe.

“In most of these cases the consumer compounds the folly of buying sight unseen by failing to get an independent purchase inspection of the vehicle carried out, preferably by a franchised dealer, the AA, an MTA garage, or a mechanic appointed by the purchaser – not someone arranged by the trader, “ says Cornwell.

The tribunal highlighted the case of a Chatham Island couple who purchased a 2008 Ford Ranger from a dealer on the mainland via a TradeMe auction – without getting it checked. They relied on the trader’s description of the vehicle as being ‘in good condition’ and ‘economical and drives great’. On arrival it had a cracked windscreen, faulty lights and a faulty transmission.

After a dispute over who actually sold the car, the couple were awarded a refund and costs – although an appeal is pending.

TradeMe head of trust and safety Jon Graham McMullan Duffy says they do see a number of such cases coming through his team, and he feels such cases are best dealt with by the MVDT.

Issues also highlighted by the tribunal were the case of a high mileage car being leased long term, unmaintained, and traders who repeatedly fail to supply ‘consumer information notices’ and attempt to sell vehicles “as is where is”.

In his recommendations for amendments to the Motor Vehicle Sales Act, Cornwell repeated a request to extend the jurisdiction of the tribunal to cover contract based claims – this year a further six cases needed to be sent to the general Disputes Tribunal. “This is not only inconvenient for applicants, but a waste of taxpayers’ money in paying for the cost of two hearings when the matters in dispute could easily be resolved by the tribunal at one meeting.”

He also called for the ability within the Consumer Guarantees Act for depreciation of a motor vehicle, through use, to be able to be recognised, noting that unlike buying a cheap appliance, in the case of a car the purchaser may have had many months of use and value before rejecting it.